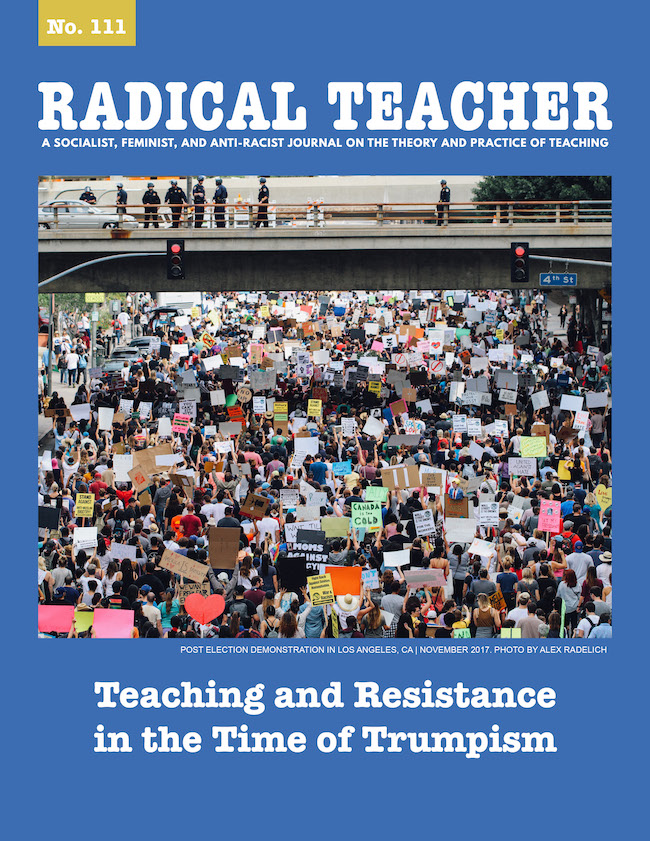 This article takes up the question of how to develop effective strategies for engaging conservative students who feel under attack in feminist classrooms. Every semester I teach a Women’s Studies course that introduces students to the history and breadth of contemporary feminist social movements, with a focus on feminist struggles that center anti-racist, queer, and economic justice analytical frameworks. As a general education course, listed in the university course catalog under the rather generic title of “Introduction to Women’s Movements,” this class attracts students with a range of political perspectives from a variety of academic majors. While the majority of the students tend to enter the class with relatively liberal analyses of gender and racial oppression, a significant minority of students have more conservative views.

Dealing with resistant and conservative students in women and gender studies is not a new phenomenon, especially in my position teaching at a regional comprehensive public university in northern California. While the university administration is supportive of students of color and undocumented students, it is also heavily invested in discourses of civility and ‘free speech.’ The recent election cycle and the current Trump presidency have empowered the more conservative students in my classes to mobilize this language to claim that they feel ‘unsafe’ in class and on campus. The appropriation of feminist and queer discourses of ‘safe space’ by students on the right to position themselves as being under attack and vulnerable presents a series of pedagogical challenges. I challenge explicit racist, misogynist, homophobic, and transphobic comments in class and my course readings rigorously challenge these forms of bias. Personally and politically I am committed to making sure that my students who are actually under threat – undocumented students, students of color, queer and trans students – are receiving the support that they need. However, I am also invested in challenging all of my students and trying to make my classrooms into spaces of transformational learning.

I explore the question of dissent in feminist classrooms through the problem of conservative students who deploy rhetorics of safety in ways that flatten out power relations and systemic oppression. How to respond to students who proudly proclaim they voted for Trump and consider themselves feminists, or to students who tearfully confess they feel unsafe on campus because of their political views? What pedagogical strategies actively engage conservative students rather than silence and alienate them? How can instructors problematize the notion of ‘safety’ for conservative students to help them develop more critical understandings of structural violence and precarity?

Lorde, Audre. “The Master’s Tools Will Never Dismantle the Master’s House.” This Bridge Called My Back: Writings by Radical Women of Color, edited by Cherríe Moraga and Gloria Anzaldúa, Kitchen Table Women of Color Press, 1983, pp. 98-101.

Authors who publish with this journal agree to the following terms:

1.  The Author retains copyright in the Work, where the term “Work” shall include all digital objects that may result in subsequent electronic publication or distribution.

2.  Upon acceptance of the Work, the author shall grant to the Publisher the right of first publication of the Work.

3. The Author shall grant to the Publisher and its agents the nonexclusive perpetual right and license to publish, archive, and make accessible the Work in whole or in part in all forms of media now or hereafter known under a Creative Commons Attribution 4.0 International License or its equivalent, which, for the avoidance of doubt, allows others to copy, distribute, and transmit the Work under the following conditions:
Attribution—other users must attribute the Work in the manner specified by the author as indicated on the journal Web site; with the understanding that the above condition can be waived with permission from the Author and that where the Work or any of its elements is in the public domain under applicable law, that status is in no way affected by the license.

4. The Author is able to enter into separate, additional contractual arrangements for the nonexclusive distribution of the journal's published version of the Work (e.g., post it to an institutional repository or publish it in a book), as long as there is provided in the document an acknowledgement of its initial publication in this journal.

5. Authors are permitted and encouraged to post online a pre-publication manuscript (but not the Publisher’s final formatted PDF version of the Work) in institutional repositories or on their Websites prior to and during the submission process, as it can lead to productive exchanges, as well as earlier and greater citation of published work. Any such posting made before acceptance and publication of the Work shall be updated upon publication to include a reference to the Publisher-assigned DOI (Digital Object Identifier) and a link to the online abstract for the final published Work in the Journal.

6. Upon Publisher’s request, the Author agrees to furnish promptly to Publisher, at the Author’s own expense, written evidence of the permissions, licenses, and consents for use of third-party material included within the Work, except as determined by Publisher to be covered by the principles of Fair Use.

7. The Author represents and warrants that:

the Work is the Author’s original work;
the Author has not transferred, and will not transfer, exclusive rights in the Work to any third party;
the Work is not pending review or under consideration by another publisher;
the Work has not previously been published;
the Work contains no misrepresentation or infringement of the Work or property of other authors or third parties; and
the Work contains no libel, invasion of privacy, or other unlawful matter.

8. The Author agrees to indemnify and hold Publisher harmless from Author’s breach of the representations and warranties contained in Paragraph 6 above, as well as any claim or proceeding relating to Publisher’s use and publication of any content contained in the Work, including third-party content.