Refusing to be Complicit in our Prison Nation: Teachers Rethinking Mandated Reporting 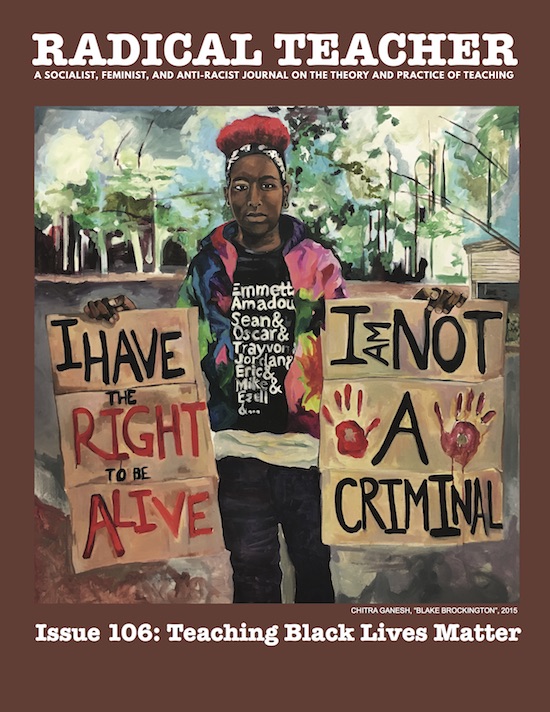 Ensuring that Black Lives Matter in schools requires seismic shifts including excavating the ongoing practices and policies that reproduce heterogendered white supremacy in schools. However, what is too often erased in these movements is the key way the profession of teaching facilitates racialized surveillance and criminalization. Teachers are mandated reporters who are required by law to report suspected negligence and abuse. While on paper this charge looks neutral, this essay illustrates why teachers should rethink their roles and organize against mandated reporting laws. To teach to ensure that all Black Lives Matter requires refusing to be complicit in the mechanisms that contribute to the destruction of too many families and communities.

This submission is coauthored by Erica R. Meiners and Charity Tolliver.

Charity Hope Tolliver is the Founder and Project Director of Black on Both Sides. A seasoned and nationally recognized youth development specialist, Tolliver grew up in the Englewood neighborhood of Chicago. She is a foster mother, writer, and spoken word artist, and former director of one of the largest and oldest organizing groups in Chicago, Southwest Youth Collaborative. In over thirteen years in the field of Youth Development, she has worked on campaigns on a broad range of issues, including fair housing, labor rights, school reform, prison reform, and LGBT youth rights. In 2012 she was selected as one of seven activists nationwide to receive the Alston Bannerman Fellowship.

Erica R. Meiners is author of several books including Right to be Hostile: Schools, Prisons and the Making of Public Enemies (2009), For the Children? Protecting Innocence in a Carceral State (University of Minnesota 2016) and articles in wide range academic journals, magazines, blogs and anthologies including Meridians, Social Justice, Women’s Studies Quarterly, Captive Genders, and No More Potlucks. A member of her labor union, University Professionals of Illinois, she is the Bernard J. Brommel Distinguished Research Professor at Northeastern Illinois University, where she teaches classes in justice studies, education, and gender and sexuality studies. 1998 Erica co-founded and still teaches at an alternative high school for people exiting prisons and jails. Currently a Soros Justice Fellow, Erica is writing and organizing around reducing our nation’s reliance on criminalization to end sexual violence.